Role of the Court 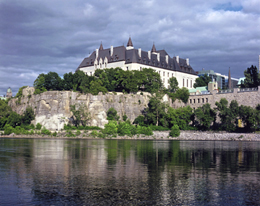 The Supreme Court of Canada hears appeals from the decisions of the highest courts of final resort of the provinces and territories, as well as from the Federal Court of Appeal and the Court Martial Appeal Court of Canada. Its jurisdiction is derived mainly from the Supreme Court Act, as well as from a few other Acts of Parliament, such as the Criminal Code. There are three procedures by which cases can come before the Court. First, in most cases, a party who wishes to appeal the decision of a lower court must obtain permission, or leave to appeal, from the Court. Second, there are cases, referred to as appeals "as of right", for which leave to appeal is not required. These include certain criminal cases and appeals from opinions pronounced by courts of appeal on matters referred to them by a provincial government. Third, the Court provides advisory opinions on questions referred to it by the Governor in Council. See the Appeal Process in the Supreme Court of Canada for more details.

The importance of the Court’s decisions for Canadian society is well recognized. The Court assures uniformity, consistency and correctness in the articulation, development and interpretation of legal principles throughout the Canadian judicial system.

Most appeals are heard by the Court only if leave is first given. Leave to appeal is granted by the Court if, for example, the case involves a question of public importance or if it raises an important issue of law (or an issue of both law and fact) that warrants consideration by the Court. The Court’s decision whether to grant leave to appeal is based on its assessment of the public importance of the legal issues raised in the case in question. The Court thus has control over its docket and is able to supervise the growth and development of Canadian jurisprudence.

Appeals as of Right

There are a few instances where leave is not required. In some types of criminal cases, for example, an appeal may be brought as of right where one judge in the court of appeal has dissented on a point of law.

In addition to being Canada's court of final appeal, the Supreme Court performs a unique function. It can be asked by the Governor in Council to hear references, that is, to consider important questions of law such as the constitutionality or interpretation of federal or provincial legislation and to give its opinion on the question.

An appeal is heard after the parties and any interveners have prepared and filed with the Court the required documents, including a record of evidence and documentation from the lower court files and factums stating the issues as well as the arguments to be presented. These documents are filed in both paper and electronic versions. Hearings of appeals are scheduled by the Registrar.

The Supreme Court holds three sessions a year and hears on average between 65 and 80 appeals a year. Each session lasts three months. The first session begins in January, the second begins in April and the third begins in October. In recent years, it has been the Court's practice to start each session on a Monday.

Although the Court sits only in Ottawa, litigants can present oral arguments from remote locations by means of a videoconference system. The Court's hearings are open to the public and most hearings are recorded for delayed telecast. When in session, the Court sits Monday to Friday. A quorum consists of five members, but most appeals are heard by panels of seven or nine judges.

On the bench, the Chief Justice, or in the Chief Justice’s absence the senior judge, presides from the centre chair with the other judges seated to the presiding judge’s right and left by order of seniority of appointment. At sittings of the Court, the judges usually wear black silk robes. They also have ceremonial robes of bright scarlet trimmed with Canadian white mink, which they wear in Court on special occasions as well as in the Senate at the opening of each new session of Parliament.

Except by special leave of the Court, the only persons who may argue a case before the Court, apart from the litigants themselves, are lawyers from any Canadian province or territory. As a general rule, the Court allows two hours for the hearing of an appeal. Each side is given one hour to present its arguments. Interveners may also be given the opportunity to be heard. At the hearing of an appeal, the judges often question the lawyers.

Judgments of the Supreme Court of Canada

In some cases, the Court will render its decision orally at the conclusion of the hearing, but most of the time it reserves judgment to enable the judges to write considered reasons. Decisions of the Court need not be unanimous: a majority may decide, in which case the minority will give dissenting reasons. Each judge may write reasons in any case if he or she chooses to do so.

When a judgment is delivered in a case reserved for decision, the parties are given notice of it and the formal judgment is deposited with the Registrar together with all the written reasons and a headnote. Judgments are published simultaneously in both official languages in the Canada Supreme Court Reports.

The Supreme Court of Canada’s Internet site provides a wealth of information on Canada’s highest court. Visitors to the site can learn about the role of the Court in Canada’s judicial system Canada’s judicial system and can browse through biographies of Supreme Court judges past past and present. present. The site provides information on booking tours booking tours of the Supreme Court of Canada building for those who wish to do so along with a collection of electronic resources for teacherselectronic resources for teachers. The Frequently Asked Questions Frequently Asked Questions page also serves as a useful resource for the public. In addition, the site provides a link to an external site where the Court’s judgments judgments can be consulted electronically. Visitors to the Court's site can find information on scheduled hearings scheduled hearings of the Court and search an online database of information on all the Court's cases. Court's cases. Counsel and self-represented litigants self-represented litigants can access information on electronic filing procedures and instructions for bringing an application for leave to appeal. In most instances, the Court's hearings are broadcast live on the site.

This book has three main chapters: